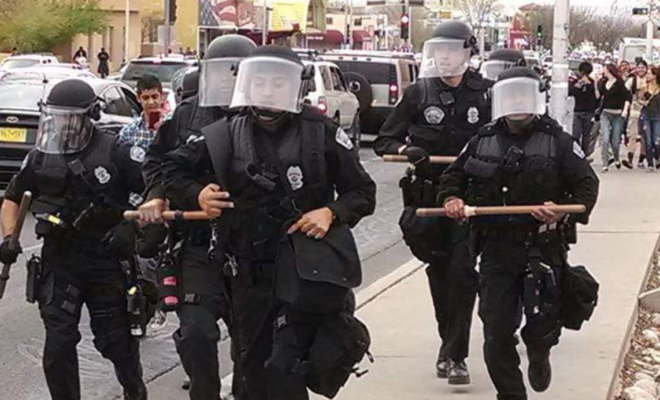 President Donald Trump and U.S. Attorney General William Barr announced they would send 35 federal agents to Albuquerque last week as part of Operation Legend, and said the agents would not be in tactical gear, the AP reported. Albuquerque Center for Peace and Justice coalition members said they oppose “occupations” similar to what’s happened at the U.S. Federal Courthouse in Portland, Oregon.

“When Trump sends stormtroopers here, we will greet them with nonviolence,” Executive Director of the Albuquerque Center for Peace and Justice Jim Harvey said, the AP reported. Harvey said that Trump is only sending agents as a photo opportunity, and he expressed skepticism that the agents will only be there to fight violent crime.

“The U.S. attorney has provided a written guarantee that Operation Legend will not be what we saw in Portland,” Democratic Mayor Tim Kelle said, the AP reported. “However, we remain concerned about the president’s own words that contradict these assurances.”

“Protests have been mostly peaceful in Albuquerque and much less violent and destructive than other cities because of our focus on reform and community policing.” – APD Chief of Police Mike Geier https://t.co/tdPUj1f08n

Kelle said he recognized that the agents are not being deployed to engage with protests and New Mexico U.S. Attorney John C. Anderson supported the deployment, the AP reported. As of June 21, 114 federal agents were reportedly in Portland, Oregon, “protecting federal facilities,” Oregon Public Broadcasting reported.

The Trump administration has offered federal dollars towards combatting crime to the city if they crackdown on illegal immigration, the AP reported. Albuquerque reportedly faces a shortage of police officers and has seen an increase in some violent crime and auto theft, according to the AP.