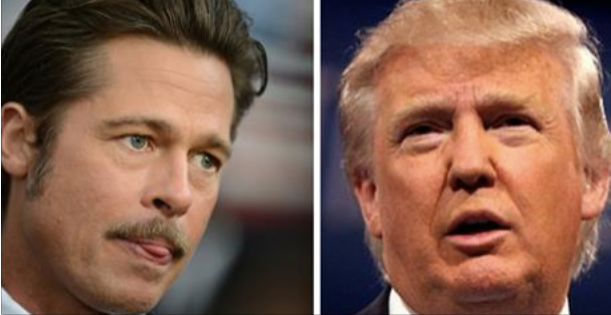 Why do celebrities feel the need to weigh in on politics?  Why?!

Despite all of the negative press he has gotten, as of late, Brad Pitt is a fantastic and talented actor.  Inglorious Bastards, Fury– great movies.  But when he and others open their mouths about politics they usually end up looking like idiots, and making half of their fans dislike them.

Pitt grew up a southern boy so it should be expected that maybe he would understand how rural America just doesn’t jive with liberalism.  Maybe it’s that a couple of decades in Hollywood changes a person.

Pitt was evidently perplexed by the Trump phenomena in a New York Times interview.  He just couldn’t seem to grasp how people could be drawn to Donald Trump.  Alas, he connected it to DNA.  When speaking of Trump, Pitt said this in part:

“Suddenly when this voice comes in – and it doesn’t have to be a voice of substance – saying he’s fed up with all of this, that’s the part that hooks into the DNA.”

What?  Does Brad Pitt understand what DNA is?  Did he get this idea from that one liberal narrative that suggests that racism runs in the blood of white people (see Nebraska State Senator Ernie Chambers)? He then went on to say,

“What does he even mean, take our country back?  Would someone please explain that to me?”

That’s simple enough to do:

Outside of LA and NYC, people are sick to death of political and Hollywood elites trying to tell them how to think.

They’re tired of having their religious liberties stomped on.  They’re tired of illegal immigrants crossing the border unopposed just so they can go register, and vote Democrat.

They’re tired of the government saying who can go in what bathroom.  And they’re absolutely sick of hearing how vets aren’t being taken care of, and police officers aren’t being respected.

However, Pitt did have one rational thought during this interview,

“It seems that the people who suffer the most end up betting for the party that would hurt them.”

It’s not clear how Pitt thinks this thought relates to Donald Trump, but we can certainly see how it applies to the Democrat Party and black voters.   A high percentage of African Americans have been voting for Democrats for decades and it has done NOTHING to benefit them.

The next time Brad Pitt is at one of those Democrat fundraisers, he should probably ask a politician how to dodge a question.  That way when a reporter asks his political opinion, he can swerve right to talking about his next movie or his failed marriage.