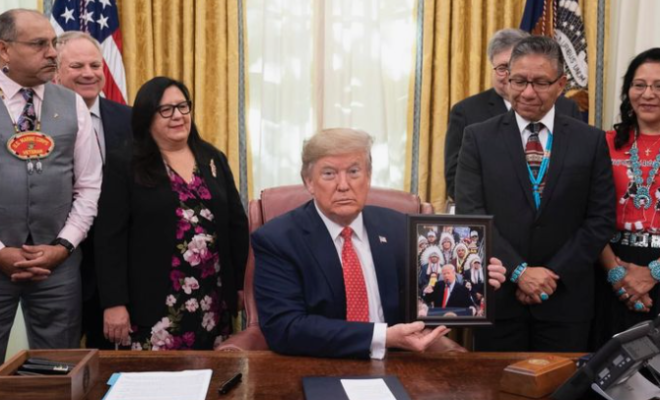 There is no evidence that Trump blamed Lizer for exposing him to COVID-19. The claim originates from a satirical article.

Trump announced on Twitter early Friday morning that he and the first lady had tested positive for COVID-19. Since the announcement of his positive test result, misinformation related to him contracting the disease has circulated widely on social media platforms.

While it is still unclear exactly where and when Trump contracted coronavirus, some people on Facebook have shared images claiming he blames Lizer for getting the disease. In the image, Trump appears to sign a document at the Resolute Desk while Lizer and other individuals watch.

There is, however, no indication Trump has blamed Lizer. The Daily Caller News Foundation didn’t find any news reporting or public statements from the president in which he does so. The image featured in the post was taken by Joyce Boghosian in November 2019, when Trump signed an executive order to “establish a task force on Missing and Murdered American Indians and Alaska Natives,” according to AZCentral’s caption.

The Centers for Disease Control and Prevention states that a person typically develops COVID-19 symptoms five days after being infected, though symptoms can appear as early as two days after infection or as late as 14 days. Trump does not appear to have met with Lizer during that time frame.

The claim originates from an article published by Tlochiin News, a satirical blog “designed to make light of Navajo Nation politics,” according to its disclaimer. The satirical blog explicitly states that “most of what we write here is made up” and that “quotes are fictitious and the scenarios are meant to sound implausible.”

The Navajo Nation was a hotspot for COVID-19 cases earlier this year, with its per capita infection rate one of the highest in the country in May, according to NPR.