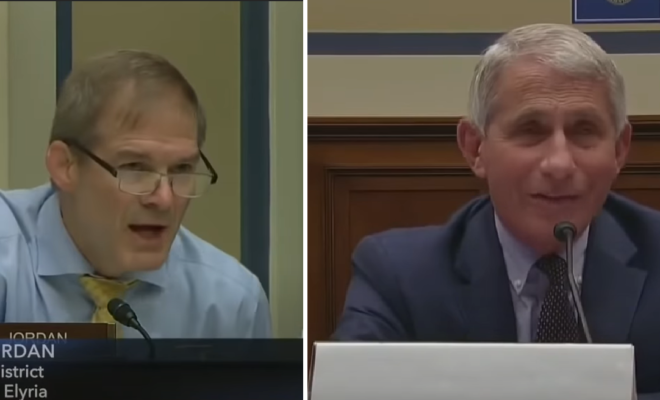 Dr. Anthony Fauci and Representative Jim Jordan (R-OH) exchanged heated words over the Corona Virus in which the doctor refused, repeatedly, to admit that the BLM and Antifa protests have contributed to the spread of the virus.

He will go so far as to say that crowds spread the virus, but seems very reluctant to make that next logical conclusion that thousands of Leftists marching without masks, shoulder to shoulder, are spreading the virus.

Watch the clip below, but be sure to have some duct tape nearby because your head just might explode as you listen to Fauci’s mental gymnastics.

It doesn’t really matter where you fall on the political spectrum as you have to see the hypocrisy here. It’s the same sort of hypocrisy that we’ve seen in the Mainstream Media where protests over the State enforcing closures of private businesses are evil and ‘killing grandma’ while anti-police protests are necessary and a duty of the American people get involved.

To be clear, this is not meant to downplay the seriousness of the virus or to suggest that Fauci’s recommendations should not be heard, it’s simply to point out that there is a consistent and repeated assault on basic American speech and institutions when it comes to law-abiding citizens while there is an absolute reluctance to call out violent riots consisting of self-identified Marxists and self-identified Communists.