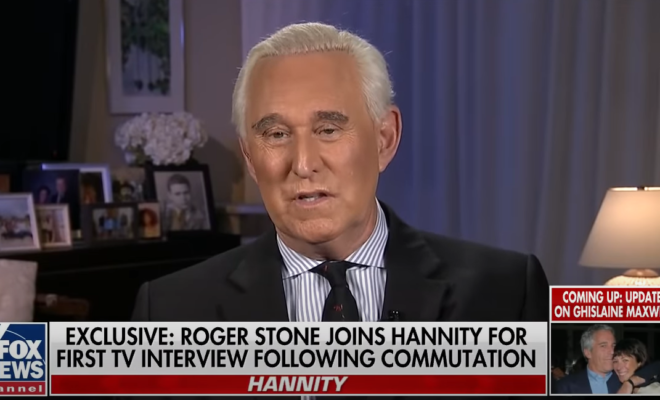 ‘Not Willing To Lie’: Roger Stone Says He Rejected Government’s Offer Of Leniency If He Would ‘Come Clean’ About Trump

Roger Stone on Monday said that a prosecutor with the special counsel’s team offered him leniency in his criminal case if he would “come clean” about conversations he had with Donald Trump in 2016.

But Stone said he rejected the offer because he had nothing incriminating on Trump to offer prosecutors.

The longtime political operative revealed the detail of the offer in an interview with Fox News’s Sean Hannity, his first since Trump commuted his 40-month prison sentence last Friday.

Stone said that Jeannie Rhee, a prosecutor on the special counsel’s team, told his lawyers that he might receive leniency in his case if he provided damning information about Trump.

“She made it very clear to one of my lawyers after a hearing, she asked to see them privately, that if I would really remember certain phone conversations I had with candidate Trump, if I would come clean, if I would confess, that they might be willing to, you know, recommend leniency to the judge perhaps I wouldn’t even serve any jail time,” Stone told Hannity.

“I didn’t have to think about it very long,” he continued. “I said absolutely not. There was no circumstance under which I would bear false witness against the president. I was just not willing to lie.”

Trump commuted Stone’s sentence on Friday just days before he was set to report to prison in Georgia to begin a 40 month sentence. A federal jury convicted Stone on Nov. 15 on charges that he made false statements to Congress regarding his discussions with the Trump campaign and other associates about WikiLeaks.

Prosecutors alleged that Stone lied to Congress when he denied speaking with Trump and other campaign advisers about WikiLeaks. Former Trump campaign adviser Rick Gates and former Trump lawyer Michael Cohen told the special counsel that they were present when Trump and Stone spoke by phone regarding WikiLeaks.

Stone has denied speaking with Trump about WikiLeaks, which released emails that were hacked from the Democratic National Committee and the Clinton campaign.

“They were hoping that I would re-characterize my phone calls,” Stone said of the special counsel’s team. “These phone calls that were plea-bargain-induced claims by Michael Cohen and Rick Gates for which they could never find any corroboration, and I simply refused to do it.”

“They wanted me to be the ham in their ham sandwich because they knew the Mueller report, particularly on Russia, was a dud,” Stone continued. “They had nothing.”

The special counsel’s report said that no Trump associates were involved in hacking or releasing stolen emails or of conspiring with the Russian government to influence the 2016 election.

Hours before Stone received clemency, he drew attention over an interview he did with journalist Howard Fineman in which he said he could have “eased” his legal situation by flipping on Trump.

“He knows I was under enormous pressure to turn on him,” Stone told Fineman. “It would have eased my situation considerably. But I didn’t. They wanted me to play Judas. I refused.”

Stone clarified his remarks in the Hannity interview, saying it was “patently false” that he “had the goods on Trump” and “traded his silence for commutation.”

” I never said that. I never implied that,” Stone said. “What I said has been consistent, that I would not lie against my friend of 40 years so they could use it for impeachment.”