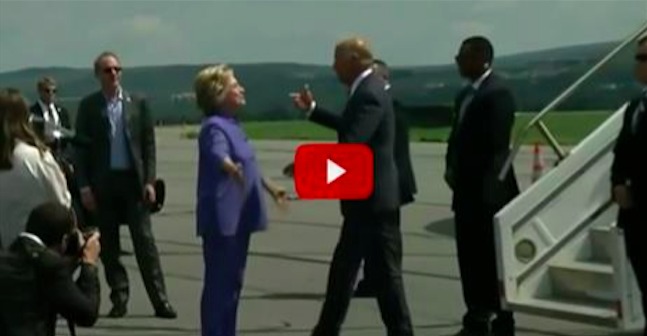 [WATCH] Creepy – Hillary Greets Biden As He Gets Off Plane, Then Things Get Really Awkward

This one will give you the chills. When former Secretary of State Hillary Clinton met Vice President Joe Biden on the tarmac in Scranton, PA, they engaged in an extremely intimate and long “hug.”

Honestly, it’s exactly what you’d expect a hug to look like between two old and deeply corrupt liberal politicians. Take a look for yourself:

Why did he hold her for so long?! He looked like a nervous teenage boy going in for a kiss at the school dance. Several Youtube commenters speculated that he was holding her up on her feet, so she wouldn’t black out in public again. Others speculate he’s just a creepy old man.

And on a side note, is anyone else alarmed that Hillary’s infamous cackle was audible over jet engines?

This wasn’t the first time Biden has displayed predatory behavior towards women. In fact, he has a well-documented history of it.

A prime example is the awkward touching that occurred at the swearing-in ceremony for Secretary of Defense Ash Carter.

Did the Vice President of the United States really think it would appropriate to stand with his hands on a woman’s shoulders on national TV? Sometimes, you can’t help but wonder if Biden is as dumb as he is creepy.

Generally, and unsurprisingly, the mainstream media usually gives Biden a pass for his sleights of hand. But some, like the Washington Post, have accurately dubbed the VP as “Creepy Uncle Joe.”

A Gawker article titled “Joe Biden, We Need to Talk About the Way You Touch Women” asked readers, “If this were any other male politician, would we be so quick to add it to the meme pile?”

A fair question definitely worth contemplating, especially as the mainstream media continues its campaign to crucify Donald Trump for his alleged past.